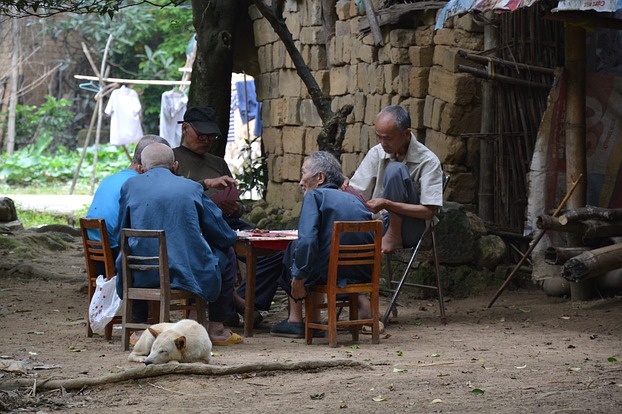 This is the second part of the review of Liao Yiwus book – The Corpse Walker: Real Life Stories: China From the Bottom Up. Click »here« to read the first part.

About the book
About the mentioned events a silence prevails in the country. People don’t want to talk about what happened, they want to forget. But the mind does not forget, people don’t forget. It must be clear that hundreds of millions of Chinese still living today have experienced this time, are deeply traumatized by what they have seen, what they have experienced – and with some of them Liao Yiwu is now talking.

Victims
There is, for example, a composer who follows the call for criticism of the system. After doing so, he is thrown in a re-education camp with a sign around his neck, forcing him to severe physical, unnecessary work. They kick out his teeth, throw him into a hole in the faith to be buried alive. Many sufferers commit suicide. But even in this darkest hour, there are people who do good. So a farmer gives him secretly a cup of water. “I will not forget this the rest of my life,” he says. “The people on the street, in restaurants, in their little cars, maybe one or the other of them once denounced someone or violently kicked someone down in order to get to the top.”

In my opinion, there is no better guide book for China than Lonely Planet

Bare arbitrariness
Also a monk has the chance to speak, who is a victim of the revolution in the fifties. Buddhism is labeled as feudal belief, and he is dragged in front of the people and badly abused. People are not aware that he converted to Buddhism with seven years and never had any possession. This shows how absurd, insane this revolution was. The “slogans shouting” he recalls, “was bloodcurdling.” He undergoes a hundredfold struggle reviews of the masses. The temple is beaten to pieces, any property confiscated, books burned. Of many monks they brake their hands and feet, pluck out their teeth. A fellow monk is jailed for 27 years without judgment, and without any reason. “China is so big, but in front of the street committee there is no escape,” he says. But also him befalls good in greatest need, as a peasant gives him food secretly. But however he didn’t develop any hate, what seems almost incredible. “Learning from the Buddha means to renounce anger.”

Not worth more than a blade of grass
Also, a widow of a landowner tells her story. Her husband and his brother are shot during the land reform without any process. Her grandmother is beaten to death right before her eyes. Penniless she tries to care for their children, but still she can’t save her daughter from starvation. Her son hides himself for two years in a hole before the find and kill him. She ends up with a black sign around her neck, but finally survives. “A human life was really not worth more than a blade of grass,” she says in the interview.

They will have their say, too. Just like the former labour group leader. “Oh, what an injustice. Tens of thousands died of starvation, but to date nobody officially confessed.” As a soldier in 1948 he should provide order on the countryside. The party orders a a mixed planting of the fields to increase the harvest, completely contrary to the common sense and the experience of farmers. “The human imagination is inexhaustible when it comes to doing the wrong thing.” People put wheat and corn just in the fields, which is no less than agricultural nonsense. The result is that there will be no harvest at all. Trees are cut down for ore production and even grain is used to heat the ovens. At the soup kitchens everyone eats as much as he wants, although noone longer works in the fields or is working incorrectly. By the end of 1959 the kitchens are empty and he will witness the dire consequence of hunger. People drive around like animals, eat earthworms, mad with hunger. Cannibalism, which noone says a word about until today until today, is all around. Parents eat their own children, landlords are killed and cooked.

Defenseless students
A director and loyal party follower becomes a counter-revolutionary in the moment when he sees the People’s Liberation Army in Beijing as they shoot their own citizens, defenseless students at Tiananmen Square.

Other people
But also very special people are interviewed by the writer. A loo man in the suburbs of Chengdu tells, as his public toilet is used as an illegal abortion station and how intellectuals have to clean toilets as an educational measure. A dead Rufer describes his business which is close to extinction and a man who is wrongly branded as leper man tells about superstition on the countryside. And then there’s Miss Hello, a young girl of today, with who Yiwu speaks in a disco. She represents the new generation who doesn’t care about a past revolution, who is enjoying here life here and now, without worry, without fear.

Conclusion
China is a great and fascinating country with a prosperous future and an important role in the world. The way that lies behind was long and hard, but you want to know only from the last stage. We in Germany know how it is, to be reminded to its own painful past all the time, and to take responsibility today for what our fathers or grandfathers did. We ourselves were not the perpetrators, but guilt is not barred. This self-reflection is important and right. But, no one has the right to tell China how to deal with its own history. In China there is a deep black veil over the events of an unpleasant past, perhaps forever. Liao Yiwu sheds some light on that shadow, just a bit, and perhaps one day the Chinese will be grateful for his time certificate.