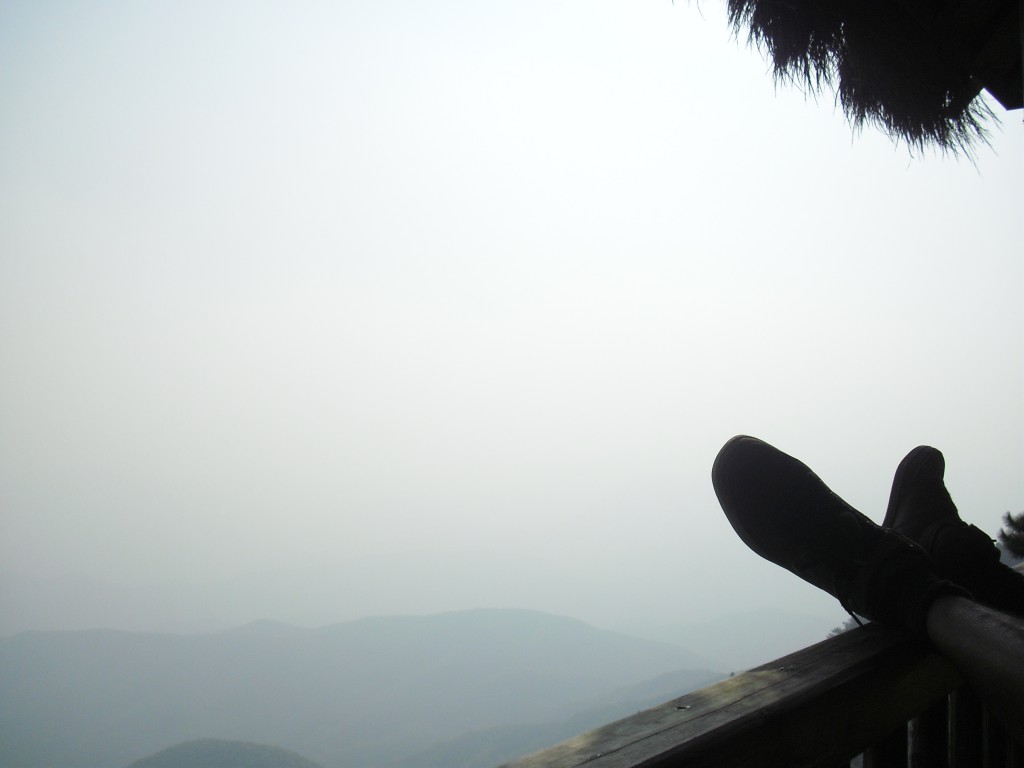 About a very special, almost forgotten place in front of Shanghai and how an Englishman lost his faith in China, just to rediscover it right there.

Summers in Shanghai are hot, very hot. The adventitious high humidity makes life in this time almost unbearable. An even short walk in the oven-like streets will leave a sopping-wet shirt on your skin. Shanghai is grilled by the sun. This is not new, but has always been that way. By the end of the nineteenth century western missionaries and businessmen suffered under the heat just like people today, and they were desperately looking for a holiday exile to escape the sun. They finally found it in a bamboo forest on a mountain called Moganshan, and in the 20s and 30s, the days of Swinging Shanghai, the life of the high society literally florished on this mountain. Magnificent villas emerged, and so did tennis courts and a large swimming pool, where stories of the big wide world were told to each other told while having a cigar and a brandy. Famous politicians, even the great Mao Zedong, stayed here, but also renowned gangsters of that time. But then the red guards overran the country. The foreigners disappeared and so did the music and their stories. Moganshan fell into oblivion and the magnificent villas disappeared under the hungry vegetation. Decades passed, and with the rise of Shanghai to a Megacity the foreigners finally came back. So it happened that an Englishman re-discovered Moganshan which is now experiencing a renaissance. What the Hamptons mean for new New Yorckers, Moganshan now means for the citizens of Shanghai.

Escape from Shanghai
Shanghai is already forgotten, lies behind me. I can feel the hole last week in my bones, and still pull scraps of conversation of the many telephone calls are in my head, from left to right and back again, before they are lost in nothingness. As more distance is created by the train to Shanghai, the more nothingness’ is there and that is exactly the reason for this weekend trip. Shanghai expats can sing that song, of 14 hour days, of work, work and more work. But until here to the station of Hangzhou it couldn’t follow me, and as the minibus finally brings me out of Hangzhou, my pulse beats only half as fast as usual in between the skyscrapers of Shanghai that are stuffed with offices.

On the streets, it is already about 9 to 10 pm, it seems as only our bus is out there on these roads, and I open the window to stretch my arm out into the coolness of the beginning night. After one hour we turn in a country road that soon leads into a forest, and shortly afterwards we wind up serpentines. The songs of cicadas penetrate into the car and, together with the running engine of the minibus and the wind an orchestra is created just for me. When we finally arrive, it is already dark and tired put my suitcase next to the bed before, before I open the balcony doors to step outside into the darkness of the night. Here, high up on Mount Moganshan, I look over a huge bamboo forest down to the valley, which end is lost in the darkness. When I enter the room again I leave the door open, and it only takes a second until cicadas sing me in a long, deep sleep.

50 Dollars
By the end of the nineteenth century missionaries visited Moganshan for the same reason as I do now more than a hundred years later. They also wanted to escape Shanghais everyday life and the summer heat to spend the warm months at the foot of the mountain at first. Businessmen followed who actually acquired the entire head of the mountain for as much as 50 dollars. Bit by bit magnificent villas were built, made of local stone, and where the international community of Shanghai made itself comfortable. A swimming pool was built as well, also tennis courts and even a church. The cool and clean air attracted more and more people, and in the early years of the 20th century hundreds of Shanghai expats spent their summer months at Moganshan.

But not only the upper class met here. Chiang Kai Shek spent his honeymoon on Moganshan. Later he met here with Zhou Enlai to discuss the action against the Japanese. Even the great Mao once came over and held a nap in one of the houses. Also, two renowned gangsters of the time, Big Ear Du and Zhang Xiaolin, purued their mysterious business right here. The latter, so it’s told, fed a mistress to one of his tigers which he held in the garden. More dark events played out here, such as the tragedy of the manager R.J. Felgate who was murdered here under mysterious circumstances.

The end of the party
But then, in 1949, the communists ended the party abruptly. The foreigners had to leave China, and the great villas on the mountain were abandoned. Later the army discovered Moganshan as a holiday resort and local Chinese citizens adopted many of the vacant houses that were already overgrown with bamboo.

That the Chinese have their own way of dealing with the old stylish buildings, is visible straight away. Old lamps were replaced by cold neon lights, the church was used henceforth as a workshop and terraces with stunning views were only abused as storage areas for trash. Large rooms became several smaller ones and cook houses were built above swimming once pretty pools. Beautiful gardens served as a garbage dumps and cozy fireplaces were simply bricked up also like easy. As with the old tennis courts and large swimming pool one knew probably not quite knew what to do, and so they just left them to themselves.

An Englishman called Mark Kitto
Time took its course and about fifty years later the Englishman Mark Kitto appeared with a sparkling life story on the scene. Kitto was the founder of the city magazine ‘That’s Shanghai’, which is still a permanent fixture still in Shanghai and also other Chinese cities. Its success made Kitto a target of the government, which simply dispossessed him. “If you are too big, you’ll get eaten,” says a Chinese proverb.

One day when unlocking the door to his office he realized that the key did not fit anymore, so that was that. So fast you are fucked in China. Reason enough to turn his back on the country forever, but he did not do so. When Mark Kitto and his wife visited Moganshan in this personal crisis, he did not know right away that he was the first foreigner in half a century who actually visited this place. He was immediately moved by the beautiful landscape, the bamboo forests and tea plantations that were all around, by the village-like surroundings with that touch of a holiday paradise. But mainly he was was interested in the magnificent houses.

He rented one of the old villas and foundet the ‘Moganshan Lodge’, which he set up with lovely old-style European furniture, as it should be for such a house. More houses were added, all furnished like in the old days. Kitto let his dream become true and finally found his peace with China. Who wants to know more about Kitto and his life in China, his book ‘China Cuckoo – How I lost a fortune and found a life in China’ is highly recommended.

Renaissance
With Kittos appearance Moganshan experienced a true rebirth. In his Lodge the first Shanghai expats styed over the weekend were followed by more. Chinese neighbors where interested in Kitto and asked him for advice, until also some of them turned their houses a proper style. So today the small town enjoys a lively tourism. Shanghainese citizens as well as foreigners came back here to escape the summer heat and the stress of the city to gain new energy for their everyday life.

Other entrepreneurs followed. Below the Moganshan Lodge, just in the middle of the bamboo forest, the eco hotel ‘Naked Retreats’ opened is door. Old Chinese farm houses were nicely furnished, and in own vegetable gardens self-grown vegetables are provided to the visitor. From the only street of the village, the Yin Shan Jie, tiny stone paths lead into the dense bamboo forest. They wind down in the valleys and up the slopes. I’m going up, first through winding narrow streets and then, quite unexpectedly, I stand in front of a large swimming pool. I cannot see through the water, as the years changed its color into green, and the tiles of the pool deck are yellowed and cracked by the weather. Weed is growing out of the joins, probably for a long, long time. For swimming, the pool is probably no longer used, I say to myself.

However, with a little imagination you can see them, the Shanghai High Society. The women, as they lie there in their deck chairs, with Long Island Ice Teas in their hands. The men who dangle their feet in the water after playing tennis. I continue up the hill, follow a small way, and soon I’m in the woods. Later, high on the mountain, I cross tea plantations and enjoy the view down in the valley. I walk around the summit, and slowly the path has become an overgrown trail.

This is a magnificant documentry about Chinese migrant workers

Here and there I pass lonesome, dilapidated houses. On one I can read the inscription “House Bergfriede, Laurenz”. Who has lived in that house, a German businessman? An adventurer, a bon vivant? What was he doing in Shanghai? Did he have a family? We will probably never know. As the twilight sets over the woods, I go back as I ordered dinner at Mark Kittos Lodge, which you have to order in advance. The road to the nearest town is far and food is transported transported when needed. Later I make myself comfortable in into a heavy, comfortable leather armchair. I take a book from the shelf that some traveler left behind. On the ceiling a wooden propeller is buzzing. The night falls over the mountain and the songs song of cicadas penetrates already quietly through the open windows. Shanghai is far, far away, it no longer exists.

Getting there
From Shanghai there are regular trains heading to Hangzhou. The journey takes about one and a half hours. From there, there are two possibilities to continue to Moganshan. From the northern bus station you might take a bus to Wukang, also called Dequing. From there you can get to Moganshan by taxi or minibus. The more convenient and of course more expensive option is to take a taxi to the bus station Wukang, where you can take another local taxi to the mountain. There are also direct bus connections to Wukang from the old North bus station in Shanghai. A more detailed description of different travel options and prices you can find on Kittos website.