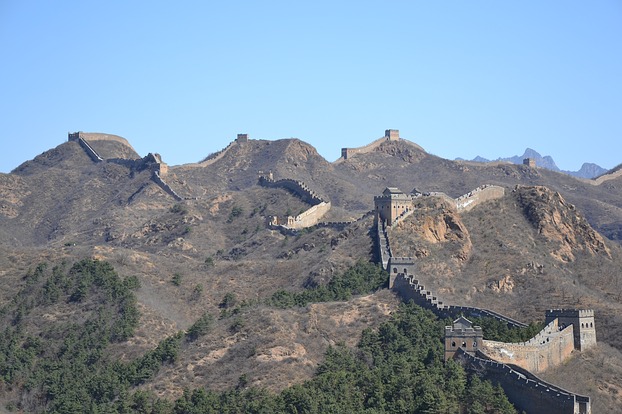 There are many sections of the great wall that can be visited in a daytrip from Beijing. The ones at Simatai and Jinshanling are among the best.

The steps lead up steeply into the air. They are cracked by the centuries and we have to use our hands to make it, virtually on all fours, to the top. Also the outer walls look more and more desintegrated as further we go. However, as more desintegrated it becomes, the more I like it, this “unimaginably long wall” as her Chinese name can be translated roughly. The more I feel transported back to a bygone era, the more I feel the power of an ancient China. All around us are mountains, nothing but mountains, and up and down winds that wall over their crests, like a mighty, never ceasing Dragon. Above us the blue sky of the Chinese summer forms a beautiful contrast to the barren landscape. And as we walk along the back of the Dragon, not hearing anything except our own steps, it seems as if we owned the whole world.

Badaling
Directly in front of Beijing the visitor can find a few hundred kilometers of the Great Wall of China. With 21,000 kilometers largest building in the world and even visible from space, it radiates such a powerful fascination that it is an integral part of every itinerary of all who visit the Chinese capital for the first time. The most famous and best preserved section is Badaling, which was made accessible for tourists in 1957 and is visited by the millions each year. Beautifully situated in a spectacular landscape, Badaling can be reached in less than two hours from Beijing. This makes it a section of the masses, as Badaling is attacked daily by hundreds of coaches.

Mutianyu
Closely followed in terms of the number of visitors, the atmosphere in Mutianyu is noticeably more leisurely than in Badaling. 70 km from Beijing, the wall is venerated by many as the best and most beautiful section. The former northern defensive wall of the Chinese capital, which should keep nomadic tribes outside the empire is, at the same time one of the best preserved wall segments. Mutianyu has its origin in the 6th century and is thus significantly older than Badaling. However, todays appearance dates back to the the Ming Dynasty (1368-1644). From 1982-86 Mutianyu was restored just as Badaling previously due to the opening to tourism. Mighty defensive towers can be admired on the accessible portion about 2 km long. The nearby villages were founded by the original builders of the wall. They are symbolic of rural China and are in any case worth a detour. Here is also a great place to escape the bustle of the city and chat with the locals who always give you a smile.

From Jinshanling to Simatai
But, who in contrast wants to walk on the original, unrestored wall and is willing to take a little more time to invest – a trick, by the way, almost always worthwhile throughout China – the 120km from Beijing lying section between Jingshanling and Simatai is exactly the right thing. This isolated and beautifully located section is largely untouched since 1570 and therefore can be admired in its original state. Built in the Ming Dynasty (1368-1389), one passes dozens of towers along the 11 km long walk. These towers are positioned in sight to each other to communicate the approach of the enemy – the northern nomadic peoples – via fire. The towers were also used for defense and as an arsenal for weapons. While the wall at Jinshanling was restorated to its original condition, with every meter it travels towards Simatai it becomes more disintegrated, older and unique.

And that’s what makes the charm of this section. Each step is a step further into the past towards an ancient China. It is advisable to join a tour such as the one organized by Beijing Downtown Backpackers which I can highly recommend. They drop you in Jinshanling and later pick you up again in Simatai. As most visitors start in Jinshanling, go towards Simatai and turn back midway, you have the chance to walk on, all the way to Simatai. As there are less visitors than at other sections anyway, you will soon find yourself alone on the four-hour hike that you will never forget.